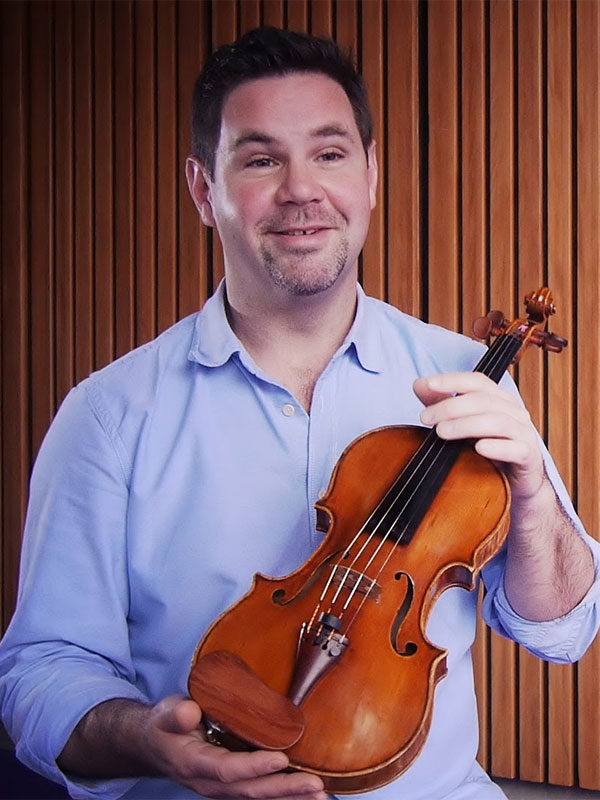 Andrew Haveron has worked as a soloist with some of the world’s leading orchestras, including the Tokyo Symphony, the Halle Orchestra and the Liege Philharmonic, under conductors such as Kent Nagano, Jean-Jacques Kanteroff. Marc Soustrot andPierre Bartholome. Andrew has performed concertos with conductors such as Sir Colin Davis (LSO), Sir Roger Norrington, Jirí Belohlávek (BBCSO), Stanislaw Skrowachewski (Halle) and John Wilson (CBSO), performing a broad range of well known and less familiar repertoire.

In 1999 Andrew was appointed first violinist of the internationally acclaimed Brodsky Quartet. A busy schedule saw the quartet perform and broadcast in their unique style all over the world, collaborating with a varied selection of outstanding artists such as Anne-Sophie Von Otter, Julian Lloyd-Webber, Dmitri Ashkenasy and Alexander Baillie through to their iconic “cross-genre” work with Elvis Costello, Björk, Paul McCartney and Sting. Andrew recorded more than fifteen albums with the quartet, many of which received industry awards such as “Diapason d’Or” and “Choc du Monde”.

Andrew is leader of the Hogarth String Quartet, which since its formation has performed throughout Europe, Scandinavia and the United Kingdom. He is also in great demand as an orchestral leader and enjoys frequent invitations to work with all the major symphony orchestras in the UK and many further afield. In July 2007 he became leader of the BBC Symphony Orchestra, broadcasting frequently on BBC Radio 3 and enjoying many appearances at the Proms including the famous “Last Night”. At the request of conductor Valery Gergiev he also led the “World Orchestra for Peace”. Andrew has also been the leader of the John Wilson Orchestra since its inception. Most recently, he has been appointed leader of the Philharmonia Orchestra and became Joint Concert Master of the orchestra in 2012.